Reminiscent of the T2 decks that took over the previous year, Arcanine focused on trying to guarantee as much pressure as quickly as possible with Arcanine ex. Lunatone replaced Jirachi to both guarantee a card needed with Moon Guidance, but also allowed the deck to play Solrock effectively, which shut down Pidgeot’s Quick Search – a staple of the format. It’s fast damage output, consistency and disruption gave it a place in the format against decks that stumbled a turn due to their inconsistent nature and over reliance on Pidgeot. A “Secret Deck” that got a lot of hype going into Worlds, it unfortunately mostly fell flat at the event itself, with only Michael Pramawat making it into T32. It would try to rely on Medicham ex to slow down your opponents early game while spreading damage, into powerful attacks with Banette ex to close it out. It’s low Energy count and inconsistency proved to be a problem however. A more aggressive version of what was seen the previous year, this version focuses more on Rocket’s Sneasel ex. It is able to disrupt opponents early on with Drag Off, and reach high numbers with Dark Ring, hitting on average around 100 damage for 3 Energy, with a higher damage cap if needed. Dark Electrode’s Darkness Navigation Poke-Power allows you to accelerate Energy into play starting from turn 2, and Dark Dragonite allows you to switch attackers when needed with ease, as well as provide a bulky 1 prize attacker. This is a more streamlined version of the deck, but players tried abusing Dark Dragonite’s ability to move Rainbow Energy, allowing for more tech attackers to be included. Jimmy Ballard managed to take this Rogue deck all the way to the finals of the World Championships for a surprise 2nd place finish. The deck was able to overwhelm opponents with powerful abilities and a mixture of types and attacks from each of the Eeveelutions, as well as the Pidgeot line. Pidgeot allowed the deck to search for any key piece when needed, and Surprise! Time Machine allowed you to both switch attackers and re-use the powerful Abilities the deck provided. Relying on the simple but effective combo of Flareon ex’s Evolutionary Flame and Ariados’s Reactive Poison, this deck is able to hit high numbers for very little energy investment. Ariados’s Spider Trap along with Energy Removal 2 provides the option to be surprisingly disruptive, especially when you consider that Special Conditions shut off Poke-Powers. A Rogue deck created by Michael Kendle and took a surprise T16 finish at US Nationals. While it may not seem as powerful as other decks in the format, Pidgeot’s Delta Reserve provides an extremely powerful hard counter to many of the decks in the format. Kingdra δ allows for efficient attacks especially when paired with Double Rainbow Energy, and its Poke-Power allows it to ramp up damage surprisingly fast. The other Kingdra also both removes the decks heavy weakness to Lightning, and provides a disruptive attacker. Due to the disruptive nature of the deck, and High HP non-ex Pokemon, many decks will struggle to take 6 prizes in a game against this. One of the most iconic decks of all time, LBS allowed incredible freedom in deck building, as the combination of Blastoise ex’s Energy Rain Poke-Power and the Holon Pokemon allowed you to charge up almost any attack in the format, with Pidgeot searching for any piece of a combo you needed each turn. Lugia ex gave the option to detonate any threat, Latias provided an option to KO opposing ex’s while only giving up 1 prize and Steelix ex allowed you to both tank hits while targeting down opposing threats on the bench, as well as supporting Pokemon like Pidgeot. While lacking in consistency compared to other decks, its explosive firepower and versatility allows it to stand a chance in nearly any matchup, especially if you decide to tech for it. Ludicargo is another deck that continued to succeed after 2005 Worlds, and was a popular pick going into 2006. Using the combination of Magcargo’s Smooth Over and Ludicolo’s Swing Dance, the deck could Search for any card it needed each turn, and most importantly not be shut down by decks teching to shut down Pidgeot. It gained the consistency of the Holon Engine with the release of Delta Species, and Rhydon allowed it to take advantage of the many top decks Weakness to Fighting. A very simple deck which relies on shutting down decks relying on Pidgeot or Magcargo for consistency with powerful Poke-Bodies. Meanwhile it attacks with an army of Lunatone DX, while only giving up 1 Prize each time it gets Knocked out. The lack of Pokemon allows the deck to make space for lots of consistency and heavy disruption. Gino Lombardi managed to take this Machamp list to T32 of the World Championships. It abused Machamp’s Overzealous Poke-Body in combination with powerful Energy Cards like Boost Energy and Double Rainbow Energy to create an efficient 1 Prize attacker with a lot of HP. Jirachi and Pidgeot provided the deck with consistency, and it was able to prey on many decks natural Weakness to Fighting. Functioning similarly to LBS, Meganium charges up a variety of attackers using its Nurture and Heal Poke-Power. Meganium allows the deck to function with different attackers (mainly Latios *) and provides different typing and sacrifices the explosiveness that Blastoise provides in favour of Healing, allowing Pokemon like Steelix ex a higher chance to tank hits. 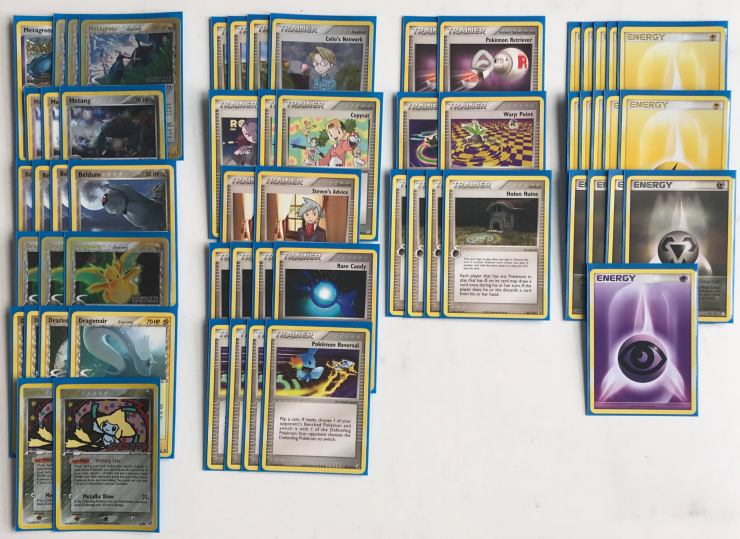 Another iconic deck of the format, Metanite proved itself to be a top contender with multiple high placements at the World Championships. Dragonite’s Delta Charge Poke-Power combos well with Metagross’s Crush and Burn attack, allowing you to hit high numbers turn after turn. Metagross also has a very strong Poke-Power in Delta Control, allowing the deck to be extremely consistent as soon as one hits the field. Many variations of this archetype did well, including a Holon focused build, as well as one involving Rayquaza *. Mewtric relies on the disruptive nature of Disconnect, and aims to make sure it gets the attack off from Turn 2, with help from Electrike’s Recharge attack. Disconnect also locks stadiums in place, meaning that a Battle Frontier can lock utility Poke-Powers out of the game entirely, or Cursed Stone can increase the damage output. Mew ex allows you to use other disruptive attacks easily like Roselia or Deoxys, or even opponent’s attacks. You can also use Manectric ex’s Mega Shot attack for higher damage output or to take out an opponent’s threat on the bench. Mew lock aims to establish a complete lock against the opponent using a variety of attacks with Mew ex, and playing from behind so it can use powerful cards like Pow! Hand Extension to lock something active. Wobbuffet’s Poke-Body makes it easy to trap something active so it can’t retreat while you either use Minun’s Sniff Out attack to infinitely re-use resources or Jynx’s Pure Power to slowly build damage on your opponent’s board to set up a win condition. Jeremy Maron shocked many when he took the same deck he used to win 2005 Worlds into 2006 Worlds and ended up with a 4th place finish. The deck had fallen largely out of favour by this point, but it was revitalised in large part by how well Pidgeot δ fared against the format. If able to set up both Pidgeot δ and Houndoom, it would be possible to completely lock opponents out of games too. Toxic was still incredibly disruptive in against Poke-Power focused decks, and Power Lariat still hit good numbers.

Politoed ex has the simple strategy of using it’s “Hit and Run” attack to retreat into a Fossil Trainer card, which at the time didn’t give up a Prize card when knocked out. It generally performed well in lower age groups, but struggled against decks which had answers against its very linear strategy. This deck sets up using Jirachi’s Wishing Star or Magmar’s Dump and Draw to start getting energies in the discard pile. This sets up a combo turn of using Electrode ex’s Extra Energy Bomb to setup attackers, while using powerful come from behind cards like Rocket’s Admin and Pow! Hand Extension to detonate both your opponent’s hand and boardstate. The Lunatone and Solrock prevents your opponent using Pidgeot’s Quick Search to draw out of Rocket’s Admin. This deck popped up around US Nationals, and managed to take both 1st and 2nd place, with Martin Moreno managing to go undefeated. The variety of attacks allows you to both play passively with Raichu’s Zzzap and Exeggutor’s Split bomb to make Scramble Energy easier to activate, as well as aggressively with powerful attacks like Delta Circle and Metallic Thunder. Holon Castform allowed the deck to setup consistently with its Delta Draw Attack while also providing strong energy support searchable with Holon Mentor. Rock Lock, as the name suggests, focused on spreading damage around the opponents board and taking as many cheap prizes as possible, as well as stunting setups with Ancient Technical Machine: Rock. Dark Tyranitar’s Sand Damage Poke-Body complimented Dark Ampharos’s Darkest Impulse Poke-Body nicely, as it meant opponent’s Pokemon wouldn’t be safe whether they evolved or not, and the constant pressure of ATM: Rock would leave them taking more damage each turn. This deck primarily focused on the format’s reliance on evolution cards and Rare Candy as it could target down either Support Pokemon, or Attacking Pokemon should the situation arise.